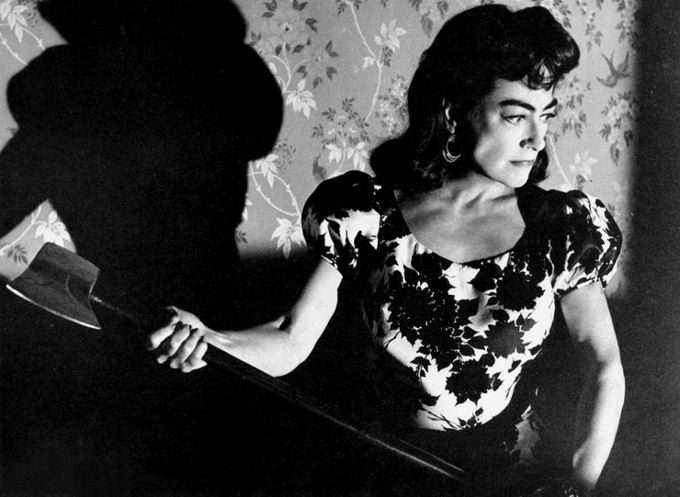 My latest book, Crazy Old Ladies: The Story of Hag Horror has just been released, and so I’ve answered some question on what it’s all about.

1. Your book tells the story of the ‘hag horror’ sub-genre, which cast former queens of the Golden Age of Hollywood. What was the inspiration?

A couple of years ago I’d seen several films that explored the later lives of actors, now struggling to earn money and stay relevant – Judy, Film Stars Don’t Die in Liverpool, Stan and Ollie, and the TV series Feud. They offer a parable of the fate of successful actresses who are eventually discarded by the movie studios they had worked so hard for and often bankrolled. From there, I began thinking of Joan Crawford and Bette Davis’s careers, and how their later filmographies were a succession of exploitative horror films. Olivia de Havilland, Joan Fontaine, Barbara Stanwyck and Shelley Winters also had resumes that featured cheap horrors. And by the seventies, there were a lot of these movies – they had also expanded from the gothic horror house to serial killer thrillers, and nature running amok. So I thought it would be fascinating to follow these actresses in later life, weave their stories together, and find out what the situation was in Hollywood, and in society at the time, that triggered this sub-genre.

2. Why did you choose the title Crazy Old Ladies?

It’s a reference to how older women are often insulted and cast aside. When rejecting What Ever Happened to Baby Jane? as a project for his studio, Jack Warner dismissed Bette Davis and Joan Crawford as ‘Washed up Old Bitches’. Women in hag horror are also frequently insulted with words like ‘Old Hag,’ ‘Old Bag,’ and ‘Old Witch’. I did initially plan to call the book ‘Crazy Old Bitches’ but I thought it might be too much.

3. Was What Ever Happened to Baby Jane? the film that started it all?

Yes, the huge success of this film led to a series of copycats, often written by Baby Jane’s writer Henry Farrell, or Psycho’s novelist Robert Bloch. But I trace the origins to Sunset Boulevard and All About Eve, two hit films from 1950 which cast older actresses as leads, and which explored their fears of ageing within a celebrity context. Norma Desmond isn’t so different from Baby Jane Hudson – they’re both clinging to their past and dreaming of a comeback, they live an isolated life, and trap another person for their company. When they are rejected by that person, they lash out in anger. Hitchcock’s Psycho also played a really important role in the trend for horror – Hitchcock showed what could be done when pushing boundaries, and how there were audiences crying out to be terrified. It was where unimaginable things happened in real settings, amongst ordinary people – and where the terrifying figure could be a seemingly harmless older woman.

4. What do you think sparked the flood of films that came on the market?

Baby Jane seemed to hit on a winning formula, casting recognisable names and degrading them with Grand Guignol thrills, and so there was a whole series of films with similar titles – What Ever Happened to Aunt Alice?, What’s the Matter with Helen?, Who Ever Slew Auntie Roo?, and even Hush, Hush Sweet Charlotte was initially to be titled What Ever to Happened to Cousin Charlotte?  As well as Robert Aldrich, the films were often directed by William Castle and Curtis Harrington, who liked to choose forgotten names from cinema and bring them back to the screen.

5. Why did actresses, who had been at the top of their game, take on these roles?

They relished the chance to star in a movie again – they knew these horror movies were creaky, but they got paid well, they were treated like stars, and it was also a way of staying relevant in the minds of young audiences who may not have been aware of their films from the 1930s and 1940s. What could be more appealing than seeing these former A-list stars, from heavily-censured films of the past, now being tortured on screen or wielding axes?

6. You mention the idea of the “Woman Alone” film as being the precursor.

In films of the 1950s, female characters fell into neat boxes – the good wife, the bad girl, and the spinster, or The Woman Alone, which was a phrase coined by Marjorie Rosen in her 1973 book Popcorn Venus. The flawed, lonely, embattled older woman serves as a warning against feminism due to her rejection of a normal family life. The films were almost saying ‘look what will happen to you if you decide not to get married or have children.’ They were driven mad by their single status and their lost looks, and this was the trope in hag horror. They were depicted in wheelchairs, or with a walking stick, they kept cats around them, or boxes of mementos from their past.

The actresses who played these parts often lived beyond their gender expectations, despite the promotion of their beauty and glamour as an aspiration for regular women. To make it to the top in Hollywood required hard work and dedication, and this was at the expense of following the traditional path of being a stay-at-home wife and mother.

7. As well as camp horror films, you also chose to explore Rosemary’s Baby, The Exorcist, and Valley of the Dolls. Why?

Judy Garland’s life formed the basis of the central, monstrous character in the 1967 camp classic Valley of the Dolls, in which she very nearly starred. I found it interesting to look at its depiction of celebrity and the fear of ageing, and it drew comparisons with Baby Jane on its release.

The scope of this book also took me to two of the most groundbreaking horror movies of the time, Rosemary’s Baby and The Exorcist. While these films may not initially seem to fit the ‘Hag Horror’ subgenre, they illustrate the fears of the time, playing up to the worries around feminism with depictions of older women, combined with a clash between tradition and youth, and statements on how the cult of celebrity had replaced the worshipping of God. And, the demon in The Exorcist was voiced by an older woman, Mercedes McCambridge, who starred opposite Joan Crawford in the camp classic Johnny Guitar.

8. Why do you think Baby Jane hit a nerve?

Bette Davis’s performance is equally comic and grotesque, and I can remember watching it on television as a child and finding it endlessly entertaining and horrifying.

On another level, it tapped into the societal context of the period, with political unrest, the growing women’s liberation movement and the switch from the cosseted Studio System to the ever-increasing violence and salacious sex of New Hollywood. And Baby Jane still continues to attract audiences. Just as the films of the 60s and 70s represented the cultural clash between the older generation and the countercultural youth, today’s battle is between the Baby Boomers and Generation Z, who find each other’s cultural and political stances perplexing.

9. What are your favourite films in the genre?

Apart from Baby Jane, I really enjoyed Curtis Harrington’s What’s the Matter with Helen? It’s an intriguing film set in the 1930s, with Debbie Reynolds and Shelley Winters as two women who end up living together and opening a dance school, after their sons have been convicted of murdering a middle-aged woman. And of course, it explores their mental deterioration. It’s also twenty years ahead of Fatal Attraction with its treatment of pet rabbits.

I also think What Ever Happened to Aunt Alice? is a real gem, and it’s the one I recommend people watch to get a feel of the sub-genre. Lady in a Cage, starring Olivia DeHavilland, is not only the first film with James Caan, but it was pretty controversial on release, as it was seen to encourage violence, even though its message was about complacency in society.

“She’s a Star” – an extract from Crazy Old Ladies: The Story of Hag Horror

shaping the look of Hitchcock’s Rebecca