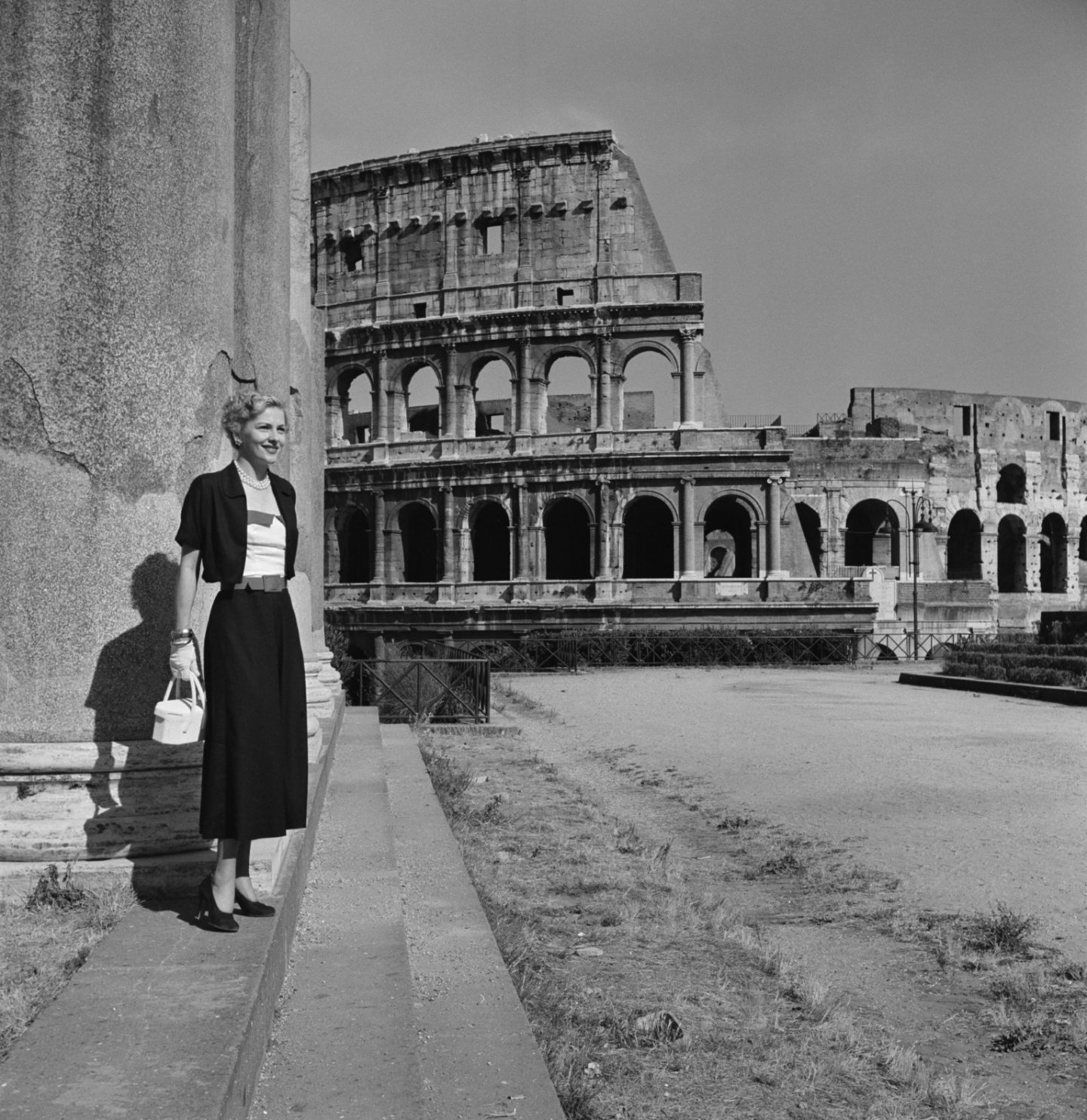 The paperback edition of Roman Holiday: The Secret Life of Hollywood in Rome is out now.

By the end of the Second World War, Rome may have been brought to its knees, but in its recovery it became a Mecca for wealthy Americans, attracted by the cheap costs of living, the lively nightlife and the flourishing movie industry.

While Rome’s citizens still struggled with finding employment and food, by 1948 the city was peppered with stars like Orson Welles, Joan Fontaine and Tyrone Power on the Via Veneto.  This grand street, sloping down from the luscious gardens of the Villa Borghese, would lie at the heart of the burgeoning celebrity culture.

After Rome was freed from German occupation in 1944, and American soldiers inhabited the post-war city, a new economy developed around them and their large pay packets. They not only discovered the joys of pizzerias, but a red-light district sprung up around the Spanish Steps. They had their photo taken by the scattini, who were poor young Italian street photographers who snapped the GIs by tourist sites like the Pantheon or the Colosseum and sold them the prints. Young men like these would later become known as the paparazzi, the scourge of the celebrities who gathered on the street in the 1950s and 1960s.

Italy’s new cinema style, neorealism, captured the hardships of the war, and it was a style born from necessity – using real people in real locations in the absence of actors and studio equipment. Roberto Rossellini’s Rome: Open City and Paisan, and Vittorio de Sica’s Shoeshine and Bicycle Thieves gained international plaudits. As Italy’s post-war film industry flourished, the reputation of Rome’s Cinecittà began attracting more and more Hollywood people to the city as production companies could reclaim their frozen lire and take advantage of favourable exchange rates.

In September 1949, The New York Times announced: ‘Postwar Italy is playing ‘Hollywood’ to more American film notables than ever before. Movie-makers or stars, they are finding Italy and her sun both a stimulating workshop and a pleasant vacation spot. For producers, part of Italy’s lure has been the unblocking of frozen Hollywood funds. But part, too, has been Italy’s own resurgence in film production. Whatever the reasons, Rome is today being referred to as Hollywood on the Tiber.’

Tyrone Power flew into Rome on a goodwill trip in his own plane after being hailed a hero during the war, and he really captured the imagination of the Italian public. His presence in the city, riding his open-top American car, brought some much-needed glamour, and it was here that he met actress Linda Christian. Their 1949 wedding at the Church of Santa Francesca Romana overlooking the Roman Forum was the first fairytale wedding after the war. In the words of photographer Jean Howard who covered the event for Look Magazine, it was ‘the international social event of its time.’ The wedding marked a new, more relaxed way of life in Rome after the hardships of war, an atmosphere where the whole city could celebrate together.

Betty Eisner, a Red Cross nurse during the war, and later a pioneering psychologist, travelled across Europe to document its recovery through the eyes of a tourist for the Los Angeles Times. In Rome in April 1949, she observed that the Via Veneto was ‘the winter capital of Hollywood. I can’t tell you how many American, Americo-Italian and Italian films are being made here just now, and the Excelsior Hotel looks like a combination of Mike Romanoff’s and the Bel Air.’ She was at first taken aback by the late serving time of dinner, of the way one had to haggle at markets, and the contrast between great wealth and abject poverty. While many Romans struggled on a daily basis, the Hollywood stars at the Excelsior could enjoy imported smoked salmon and spaghetti arrabiata with clams, crepes suzette and peaches cardinal.

One of Hollywood’s top gossip columnists, the indomitable Hedda Hopper, said she fell in love with Rome during the war, and she made sure she planted herself at the Excelsior Hotel after the war, wiring celebrity gossip straight to the Los Angeles Times. September Affair, starring Joan Fontaine and Joseph Cotton, was the first Hollywood production to be filmed entirely in Italy. Fontaine chose to travel to Rome with Hopper, a good friend in Hollywood – that is until she met Life photographer Slim Aarons at the airport, who had been hired to photograph Joan and Hedda’s arrival. As their plane made the approach to Rome, Joan told her, ‘Do you realize we’re nearing the scene of the crimes – Ingrid Bergman and Rossellini, Linda and Ty Power?…and you, you lucky stiff, will probably be the first one to get an interview with Ingrid.’ Ingrid Bergman was involved in one of the biggest celebrity scandals the world had seen, when she left her husband and daughter in the United States and fell in love with Roberto Rossellini. With rumours in late 1949 that she was pregnant with his child, Hedda would make sure she was first on the scene.

Slim worked as a military photographer during the Second World War, and after surviving the invasion at Anzio, he was awarded a Purple Heart for bravery. When Life magazine opened a bureau in Rome as the city made its recovery, Aarons took up a job there in 1948, living at the Hotel Excelsior, and where he lived the highlife for cheap – ordering Brioni suits, drinking fine wine, and mingle with cafe society on the Via Veneto.

When Joan first saw him, she was instantly attracted to the handsome photographer, and the two drove off together in his convertible, leaving Hedda with September Affair’s producer Hall Wallis to go to the Excelsior together. Hedda, who expected to be treated with complete respect, was furious. ‘I’ve never seen such rage,’ said Wallis. ‘I did everything in my power to appease her, giving her a larger suite at the hotel, besieging her with champagne and flowers, but she refused to melt until Joan apologized.’

Tennessee Williams, the American playwright, first arrived in Rome in late January 1948, following the success of his plays The Glass Menagerie and A Streetcar Named Desire. Rome captured his heart immediately – the imperial domes, spires and obelisks pushing up through the cityscape. Tennessee immediately placed himself in the glamorous heart of the city, taking a two-room furnished apartment just off the Via Veneto.  He found that as a gay man he had some freedom that he couldn’t find at home, as he believed the Italians were ‘raised without any of our puritanical reserves about sex.’ He observed in Rome that prostitution was evident on the streets and in the cafes of the Via Veneto, and where secluded corners of the Villa Borghese offered shelter for illicit trysts for lonely foreigners.

It was hard to escape from the parties and the drink, particularly the mellow Frascati wine which swept through him like a new blood washing away ‘all anxiety and all tensions for a while.’ In summer the heat from the ‘Solleone’, or the Lion Sun, dazzling on the white marble buildings and making the interiors of apartments stifling, along with the drinking and the partying, made it difficult for him to work. But the late 1940s tourism of Rome helped inspire him to pen a novella, The Roman Spring of Mrs Stone, about a widow losing herself in the city and struggling to hold on to her youth. He described Rome at five o’clock, with ‘domes of ancient churches, swelling above the angular roofs like the breasts of recumbent giant women, still bathed in gold light,’ and the ‘urchin vendors of false American cigarettes who found the Spanish stairs a convenient place to skip out of sight’ and who headed towards the Via Veneto, ‘where the American tourists thronged.’

Evenings were spent with his expanding circle of gay expats, who had begun arriving on the scene throughout 1948 and 1949, including Truman Capote and Gore Vidal. They would enjoy cream and parmesan fettuccini at Alfredo’s, drinks at the Café de Paris or the Rosati, or sun themselves ‘like a bunch of lizards on the walk in front of Doney’s.’

The Hotel Excelsior in 1948 rebuilt an annex and opened the Doney café, with its sidewalk area seating up to 400 people, and which became a popular meeting place for Americans in Rome. Indeed, in 1948 Tennessee Williams described the Doney as ‘the fashionable sidewalk café in front of the fashionable hotel Excelsior.’ Orson Welles, recently separated from Rita Hayworth, stayed at the Hotel Excelsior while preparing Macbeth, and he was spotted by Tennessee at the tables of the Doney, ‘reading a book called Decadence.’

Rome, assisted by American funding from the Marshall Plan, would continue to thrive throughout the 1950s. As the New York Times reported in 1952,

‘All over Rome today, almost everyone seems to be talking movies, making them, or helping in the process. The creative spirit flourishes, and discussions are not limited to the city’s eight major studios or to the fashionable Via Veneto, that vital showcase for has-beens and want-to-bes.’

And in summer of that year a young actress called Audrey Hepburn arrived in the city to make a little romantic comedy called Roman Holiday – a love affair to the city; ice-cream on the Spanish Steps, window shopping on the Via Condotti, dancing on a barge on the Tiber, and a ride around the Colloseum on a Vespa. It was a film that would show the promise of the city, its recovery and optimism, as the city entered into the period that would become known as La Dolce Vita.

Extracted from Roman Holiday: The Secret Life of Hollywood in Rome by Caroline Young