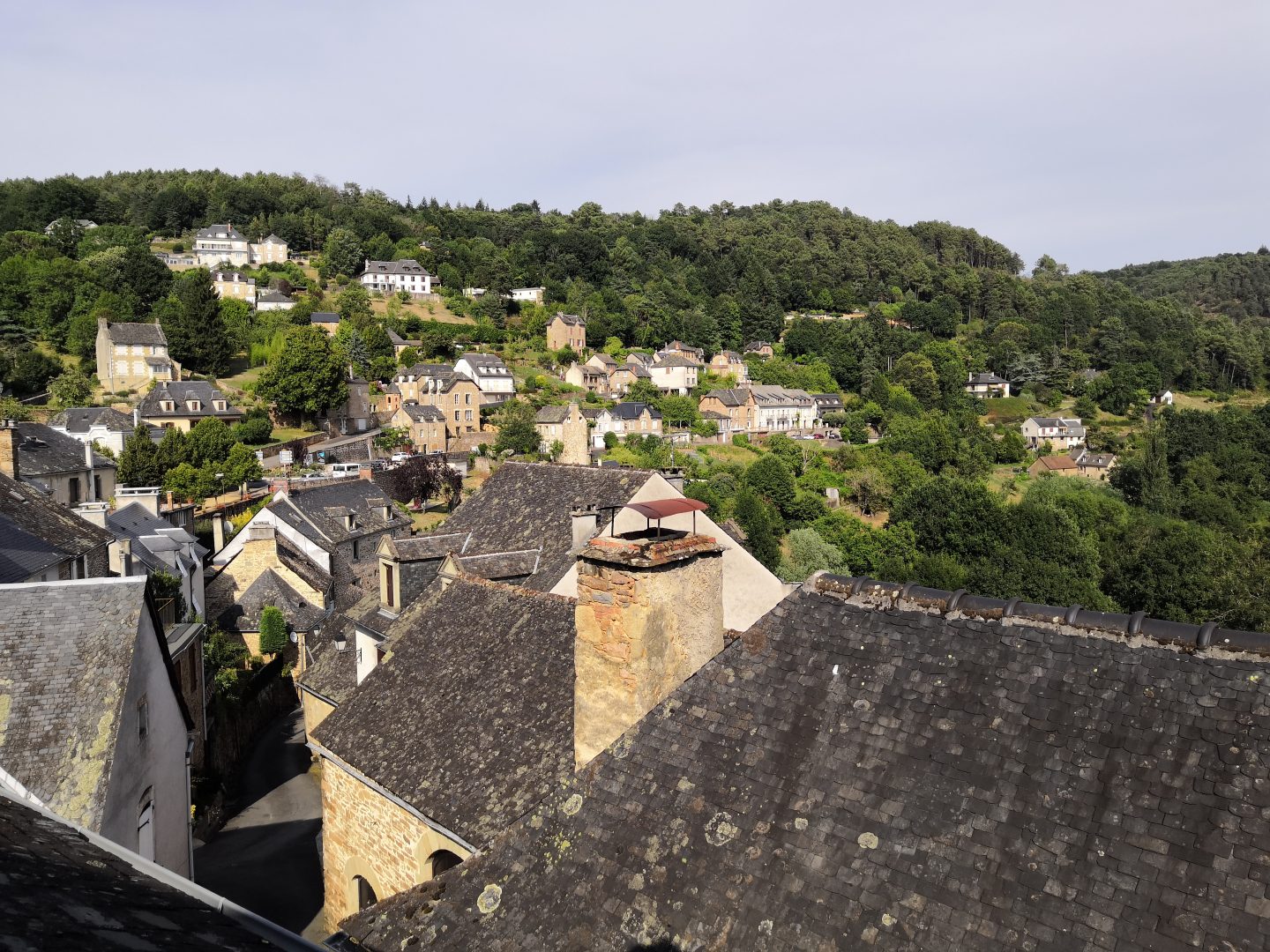 From her Scottish tweed jackets and Breton striped tops to the monochrome colour scheme from her childhood spent in a remote convent, Coco Chanel was inspired by the places she visited.

When I was researching my 2019 book Living with Coco Chanel, which explores the homes and landscapes that shaped the ground-breaking designer, I travelled to the significant places in Chanel’s life. Paris may have captured her modernism and bohemian spirit, but Chanel was also influenced by her time in the remote Auvergne region of France, her home on the French Riviera and in the Scottish Highlands with the Duke of Westminster.

Come on a journey with me to explore some of the key locations from the comfort of your home, and discover what inspired the creative mind of one of the most famous designers in the world.

The most significant location in Chanel’s life, the one that holds the key to the codes of her designs, is the convent of Aubazine Abbey. It was here, in 1895, that twelve-year-old Gabrielle Chanel and her two sisters were abandoned by their peddler father after their mother died of tuberculosis in the nearby town of Brive-la-Gaillarde.

Aubazine Abbey was founded in 1135 and is located on a plateau in the remote Auvergne mountains. Surrounded by pine forest and chestnut groves, the medieval village is incredibly quiet and peaceful, and as the mist rolls over the mountains in the mornings, it brings with it a sense of mystery.

Many of her signature pieces, such as the little black dress, the double C logo and the black, white and beige colour scheme all stem from her time in the convent. The nuns walked the white corridors in their black and white habits, pristine white sheets and petticoats were hung out to dry in the courtyard, and beige was the colour of the sandstone walls.

There is also a medieval mosaic on the floor of the convent’s corridor which depicts moons, stars and Maltese crosses; symbols later used in Chanel’s jewellery collections. The windows in the abbey, with their colourless glass set into leaded geometric patterns like Celtic knots, may also have been the inspiration for the double C Chanel logo.

When Chanel turned eighteen, she left Aubazine for the Notre-Dame convent in Moulins, where she was given board in exchange for work as a seamstress. Moulins was a lively military town at the turn of the century, where regiments stayed at the barracks, Quartier Villars, across the river from the medieval centre.  Chanel and her aunt Adrienne, who was only one year older and more like a sister, found work as sales girls at a tailors, the House of Grampayre, on cobbled rue de l’Horloge, close to the Jacquemart clocktower.

Officers from the barracks, one of whom was wealthy socialite Étienne Balsan, came into the shop for alterations to their uniforms, and invited the Chanel girls for sherbets and chocolate at popular tearoom La Tentation, or to Les Palets d’Or chocolatier, with its beautiful neoclassical facade, designed in 1898 by the Moulins School of Fine Arts.

The officers encouraged Chanel to sing at the town’s café-concert venues La Rotonde, an octagonal iron pavilion surrounded by gardens, and The Grand Cafe, with its plush Art Nouveau interiors. Her repertoire each evening included ‘Qui qu’a vu’ Coco’ and ‘Ko Ko Ri Ko’, which earned her the nickname Coco.

Chanel and Adrienne sometimes visited nearby Vichy, the fashionable spa resort where the bourgeoisie of the Belle Époque flocked for restorative mineral waters. Chanel adored the parks in which orchestras played in the bandstands, the cabaret acts in the Grand Casino, the elegant cafés and afternoon teas. ‘Away from my chestnut groves, Vichy was a fairyland,’ she once said. ‘A ghastly fairyland in reality, but wonderful to fresh eyes.’

Étienne Balsan bought an estate, Royallieu, in the forest of Compiègne, northeast of Paris, where he immersed himself in his passion for horseracing. Realising there wasn’t much in Moulins for her, Coco followed Étienne to Royallieu, and by 1906 had moved into the château.

On arrival, Coco soon discovered that Étienne’s primary mistress was Émilienne d’Alençon, a renowned courtesan. Impressed by Chanel’s unique tomboy style of little boater hats and tweed jackets worn with shirt and tie, Émilienne chose to sport one of Chanel’s hats to the races. The simplicity of the hat immediately attracted attention, as it was so different from the over-the-top confections of the day.

Chanel first visited Deauville with her lover Arthur ‘Boy’ Capel in the summer of 1912 where they stayed at the newly-opened Hotel Normandy. With its charming streets of neo-Norman buildings, chalk cliffs flanking a long sweep of golden sand and the bracing waters of the English Channel, Deauville was the French summer resort for the wealthy and connected at the turn of the twentieth century. Vogue magazine even named it ‘the summer capital of France’, with the ‘shortest, gayest and most exciting season of any of the fashionable resorts on the continent’. Activities included yachting, boating, racing, polo and gambling at the Deauville Casino.

Boy encouraged Chanel to open a new boutique on rue Gontaut Biron and her name was boldly printed in black on a white awning. When war broke out, Paris society women escaped to the relative safety of Deauville, and Chanel found that her austere, simple designs perfectly captured the mood of the time.

From its position in Roquebrune Cap-Martin, with the glittering, moneyed Monte Carlo in the distance to the west, the Italian border to the east, and the foothills of the Alps as a backdrop, La Pausa was Coco Chanel’s magnificent French Riviera sanctuary. In Roquebrune the cicadas hummed from the olive trees, the smell of pine caught on the breeze and ancient paths meandered down the steep hills, which Chanel often strode up and down for exercise.

Chanel created the villa from the ground up, holding within its design the secrets of her childhood in Aubazine, with its replicated cloisters, vaulted archways and stone staircase. In 1930, American Vogue called La Pausa ‘one of the most enchanting villas that ever materialized on the shores of the Mediterranean’.

The villa is still situated in this prime location, and while you can walk up to its gates, and follow a path to the back of the house to view it, it’s not possible to see inside.

Chanel took up with the immensely wealthy Duke of Westminster after meeting in Monte Carlo at Christmas 1923, and he introduced her to his 100,000-acre Reay Forest estate in the rugged northwest of Scotland. They stayed at Lochmore Lodge, a fifty-two-room granite mansion with Victorian Gothic turrets, and Stack Lodge, the Duke’s sport’s house on the River Laxford, which was a base for salmon fishing, a sport which Chanel threw herself into with enthusiasm. Winston Churchill visited the couple in 1927, and he wrote to his wife Clementine in October of that year: ‘Coco is here in place of Violet. She fishes from morn till night, & in 2 months has killed 50 salmon. She is [very] agreeable – really a [great] & strong being fit to rule a man or an Empire.’

Westminster purchased another property, Rosehall, near Lairg, and he gave it to Chanel to decorate. When he sold it in 1930, the house fell into disrepair, yet Chanel’s touches are evident in the beige colour scheme evident on the painted doors, skirting boards, and timber mantelpieces. Bedrooms were decorated with French floral blockprint wallpaper, and there is even a bidet; likely one of the first in the Highlands. Find out more about my trip to Rosehall and see more photos from inside.

Chanel’s luxury sports clothes in the late-twenties reflected her time with Westminster and the tweed jackets she borrowed from him to go fishing. Vogue, in 1926, reported that ‘tweed is an essential of the smart new wardrobe’, and it would remain a signature textile for Chanel, particularly with the little tweed boucle jackets worn with a string of pearls.

You can find out more about the places that inspired Chanel, and the secrets that are held within her designs, in Living with Coco Chanel, available to buy now.

The Glamour Boys of the RAF